Working with legendary developers, top builders and leading architects since the 1960s, Bob McElligott has shaped communities, steered innovative growth and clinched the kind of major transactions that have transformed our landscape.  Today?  He’s in his element.  As co-founders of Brickland Timberlay, he and his wife Micheline are tackling diverse, larger-than-ever development projects and building on a history of excellence. 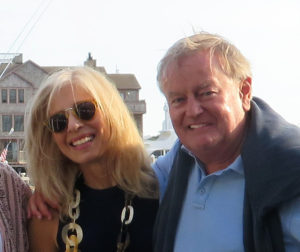 Timberlay Developments Past Projects (prior to 1990)

In seven decades, Bob McElligott has been a master dealmaker. Working with legendary developers, top builders, leading architects and planners since the late 1960s, this Ottawa entrepreneur has shaped communities, steered innovative growth and clinched the kind of major transactions that have transformed our landscape. Today? He’s in his element. As co-founders of Brickland Timberlay, he and his wife Micheline are tackling diverse, larger-than-ever projects and building on his history of excellence. As ever, Bob is having a ball.

He grew up in Halifax and in the 1960s, after earning a bachelor of commerce from University of Ottawa (St. Patrick’s College), he got his real estate license and then an MBA from the University of Toronto. Along with a partner, Michael Valiquette, Bob formed a company called MacVal Enterprises. They wanted to build houses and in order to get quickly established with no equity, they built under government-sponsored programs: a federal one called AHOP and a provincial one called Home Ownership Made Easy (HOME).

“I thought I knew what I was doing,” Bob says with a laugh. In the first year running MacVal, he and Michael built 17 houses and earned just $1000. Thanks to HOME, though, they were able to make a go of it. In year two, they built 60 houses and earned $35,000. (A profit of $700 per house was the norm in the late 60s and early 70s). Pretty soon, MacVal was turning a profit and turning heads. The company became the fourth largest builder of low-rise residential units in the city of Ottawa by its fifth year.

There were projects in New Edinburgh, Barrhaven, Queensway Terrace, Craig Henry, Rockcliffe Park and Rothwell Heights. There were also many joint ventures with industry titans such as Bill Teron, the Fuller Group, Sol Shabinsky, Pat Gillan, and Oerlikon Brule of Switzerland.

Robert Campeau’s Campeau Corporation came calling in 1973, buying up MacVal. While Michael Valiquette went on to do other things, Bob became a Campeau vice president as MacVal became a Campeau division.
Bob continued to make a name for himself, learning the ropes of corporate business. At age 31 he became president of the Greater Ottawa Home Builders’ Association, and it wasn’t long before he wanted to go back into business for himself. Seeing an opportunity to concentrate on high-end infill projects within the city of Ottawa, he left Campeau to form Timberlay Developments.

“I ended up doing a lot of interesting things,” he quips. Sure, there were challenging moments, but “I was on top of the world, doing everything I always want to do. This is what made me tick.”

In addition to becoming the city’s first custom infill builder, he had projects on the go from Kanata to Orleans. In Orleans, he built Club Citadelle, a cutting-edge 270-unit condominium community. Not only did it have its own clubhouse and lifestyle amenities, the price point allowed first-time homebuyers to buy in. “No one had ever done that before.” Prices started at $49,900.

At Brown’s Inlet in the Glebe, he crafted a community of 17 luxurious townhomes. “It’s probably my most favourite project,” he mentions. “I had to use every skill I had to stickhandle through the various regulatory bodies, including the community association, but it worked.” He describes the architect, Wolf Mohaupt, as “Very Germanic: Straight lines. Muted colours. Very little materials waste. He worked with what he had.

“We had so much fun,” he continues. “Wolf was difficult, but I loved every minute of it. He was mostly right.” Bob was proud to work as an assistant foreman under the guidance of George Fortier, Timberlay’s superintendent, whom he had pirated from Minto.

Next, Bob got into retirement homes through a joint venture with Fuller Construction. Along the Rideau River on Wilbrod Street, they built Ottawa’s first premium retirement residence: Rideau Place.

But when the 1990s arrived, a recession came about and opportunities dried up. Bob left Ottawa to live at his country home at Mont Tremblant. While there, he saw new opportunities and started making phone calls. One of those calls was to top executives at Intrawest. Were they interested in a mountain in Quebec? A ski mountain?
They were, arriving within days. “The rest is history.”

Not only was Bob instrumental in bringing Intrawest to Tremblant, transforming it into an international resort, he also ushered Mattamy Homes to Ottawa in the early 2000s. After returning to live in the city with Micheline, and restoring their century-old home in Rockcliffe Park, he started looking around for a variety of challenging projects.
Bright eyed, bushy tailed, and back in action, he noticed two details right away: The city was working on a new official plan, and all the large, local developers were asleep at the switch.

As land development became more of a passion, so did “land sleuthing.” Calling himself a good “kitchen table negotiator,” Bob says he’s been behind many major, under-the-radar-screen land assemblies for both residential and commercial Ottawa builders over the last two decades.

There have been high profile undertakings too. For instance Timberlay became Brickland Timberlay so Bob and Micheline could collaborate on different ventures. To Bob’s savvy “kitchen table” approach, Micheline has added multinational savoir faire.

As a senior property portfolio manager for Foreign Affairs and International Trade Canada in the 1990s, she spent the better part of that decade handling commercial property investments for Canadian embassies, consulates and permanent missions abroad; she also managed crown properties subject to litigation. “There was a high level of political nuance to many of the transactions,” she notes, “especially relating to the status of our accommodations that were given many years ago to Canada.” For instance, she used her considerable skills to protect a couple of precious assets in Paris: Canada’s embassy on exclusive avenue Montaigne, “a hop skip and a jump from the Seine,” and the Canadian Cultural Centre at 5 rue de Constantine. On her watch, a decision to sell those properties was reversed. “The cultural centre was immensely important to keep, because Paris is all about culture.”

Along with protecting Canada’s interests, she adds, “I also really wanted to increase our presence, especially where we had stronger trade missions.” She mentions undertakings in Sydney and Brussels, as well as renovations at Canada House in London, but says her favourite project was “Geneva, our permanent mission to the United Nations. It was really fascinating work.”

Then Micheline started helping with Bob’s work, and was really captivated. “It’s been a lot of fun, working back in the private sector. Bob’s the master planner, the visionary.” For her part, Micheline has added a wealth of expertise to the company as a result of her broad international experience, becoming its chief operating officer.